Last years not so bright idea to hit the road immediately after clocking out from the night shift resulted in several days of migraine so I was in no great hurry to repeat that mistake again.
But on the other hand I didn't really want to "throw away" the first day of the vacation either.
Thus a compromise, I slept for four hours until noon and took off.
Also in contrast to last year I had time to prepare the departure before hand so I'm already loaded up and on the road by about two.

An entirely uneventful journey the fastest and quickest route to Malmö with so few stops that for the first time ever I'm confronted with absolutely having to stop because I'm running out of fuel.

I looked for a hotel in Malmö for a long time because it was hard to find one with a garage, the first one I contacted had had theirs full for the last three weeks.
So I finally played a bit of a dirty trick on Best Western Malmö Arena and just wrote in the "information to the hotel" box that I needed space for a motorcycle and not necessarily a full parking space.

It paid off, checking in I was "the guy with the motorcycle" which apparently had caused a bit of a concern but as long as I was ok with parking directly next to the gate "where there isn't room for a car" then it was all right (I could have parked at least 4 bikes in that space), on top of that they actually discounted the parking.

I had planned this as a rest stop only so the location wasn't great, there really was f**k all to either see or do in the neighbourhood so I just took a short stroll and hit the sack. 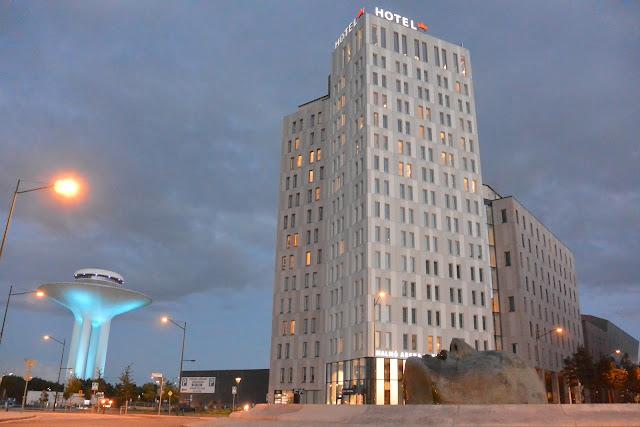 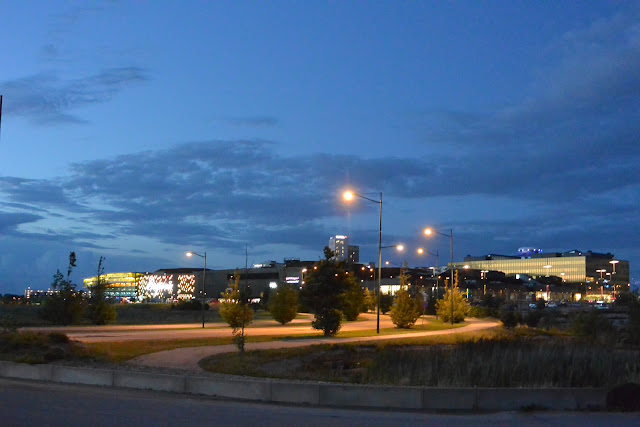 Map of this years route as high res jpeg (zoom in for details).

This an interactive map from the Furkot route planner.
Klick here to open the map in a separate tab.
All routes where I didn't follow motorways have detailed info.

Somewhere along the way towards Hamburg I notice that my left indicator isn't looking quite a perky as I'm used to.
I don't know how or when it happened but the indicator stem is broken and the indicator is just hanging by the wiring.
I probably could have done a bodgejob but I'll need to get a new one sooner or later and I have plenty of time, the train doesn't depart until 9.30PM.

The plan was to spend the time at Louis Gigashop and/or Touratech but instead I google the largest Triumph dealer in Hamburg which turns out to be Triumph Flagship Store.
I park outside the shop at about 3.30PM and explain that I need an indicator, new or used doesn't matter but I need it replaced asap since this is just the second day of a three week trip.
One of the salesmen went out to check the stock and I got my ass parked in the "lounge" with a steaming cup of coffee.
While I'm sitting there enjoying the elixir of life I notice they actually have Triumphs LED-indicators hanging on the wall which is a bit "bling" compared to original but hey, beggars can't be choosers.
I go up to the counter and offer to buy the pair if they don't stock the standard.
I does require changing the relay as well and to make a long story short she very politely assures me that it'll probably work out and thinks I should enjoy the coffee while I wait.
I think I pretty much got the German version of sit the f**k down and chill the f**k out.

At most fifteen minutes later Marvin, the salesman who was just checking the stock comes up to me and asks me to turn on the ignition real quick to check that the new indicator he's just fitted is working.
He not only found an indicator, he also fitted it without me noticing and politely and regrets that it took him so long because after all he is a salesman and not a mechanic.
Obviously the indicator is working just fine and when I reach for my wallet and ask how much I owe him he just reaches out his hand and wishes me a nice trip! A firm handshake was payment in full.

I can hardly believe it, these thing don't happen in real life.
I feel like I've just experienced a bike-version of a dear Penthouse...
I mean I liked Hamburg and the Germans even before this but now I love each and every one of them and if I wasn't a Triumph fanatic before, now I'm both saved and born again.

I still have plenty of time to spare until the train so I still manage a stop at Louis, a better place for a biker to spend a bit of time you'll be hard pressed to find.
And by some skewed logic I had saved a bundle of cash by not needing to pay for the new indicator.
I wander around in the shop until closing and leave with an arm full of much needed stuff which I didn't really need at all.

I continue to Altona, check in to the Autozug and park up at the usual place.
While I'm waiting to board I stock up in Lidl and get some dinner at Subway.

Well on board the train I'm sharing the compartment with a Danish middle aged pair whos names I've unfortunately forgot but just to keep the sterotypes alive I'll call them Solveig and Preben.
The fourth man in our compartment I do remember the name of, his name was Arman and had a very strange job.
He was on the crew of RV Polarstern, a research polar icebreaker.
At most he'd been out 15 months straight, staying through the winter at the north pole.
Now he had taken his BMW motorcycle to Nordkap and had ridden down through Finland, Sweden and Norway.
This was his first ride on the Autozug even though he didn't live more than 60kms from the terminal at Lörrach.

The Danish couple had it a bit more figured out, this was the 11:th time riding the Autozug and their plan was to setup base camps at different strategic places throughout the alps and do daytrips.
They both rode sports bikes so they where somewhat limited when it came to hauling gear around.

Between the Dane and the German I became witness to a very amusing sales pitch.
Arman at one point said that the Polarnstern was close to giving up the ghost.
I can fix that, said Preben who works for the Danish defence forces which apparently are about to sell all their icebreakers.
It seems that the Danish government have decided that there won't be any more cold winters this eliminating the need for icebreakers.
I'm not a gambling man myself but even if I where I wouldn't like those odds.

Well soon enough all our planned vacation routes are on the table and Arman who's been touring on motorbikes for the last 30 odd years gives me a very honest and spontaneous opinion of my route, especially tomorrows which is about 400kms through three alp passes and that opinion was very short and to the point: FUCK!
He then in more diplomatic terms gives a big thumbs down on my entire route which he describes as rather overly ambitious and then proceeds to point out that when I realize that my original route isn't doable then instead I might...

The whole discussion went over a few beers he'd ran of to get before departure so it was all in good spirits.
We were expecting the wake up call around 6AM so after a couple of beers it was time to hit the sack. 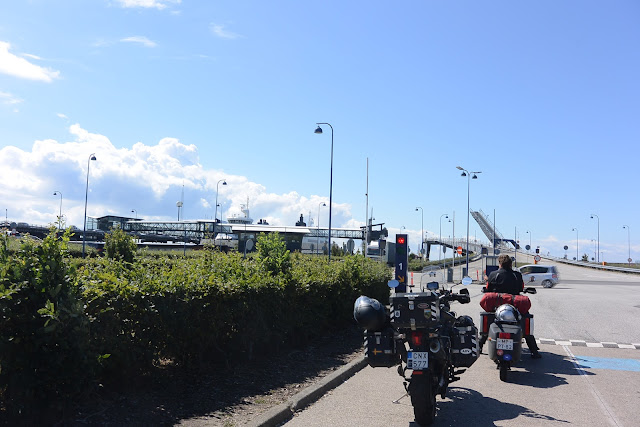 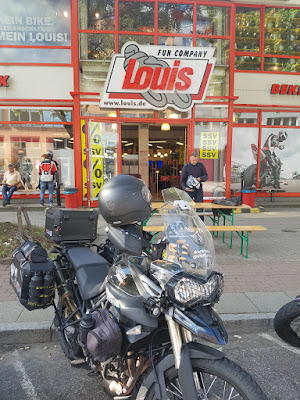 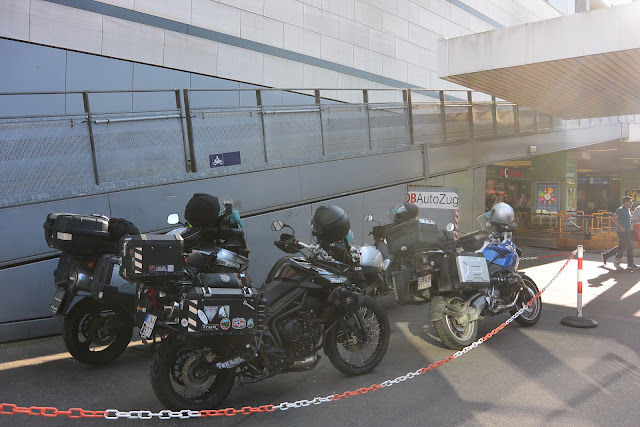 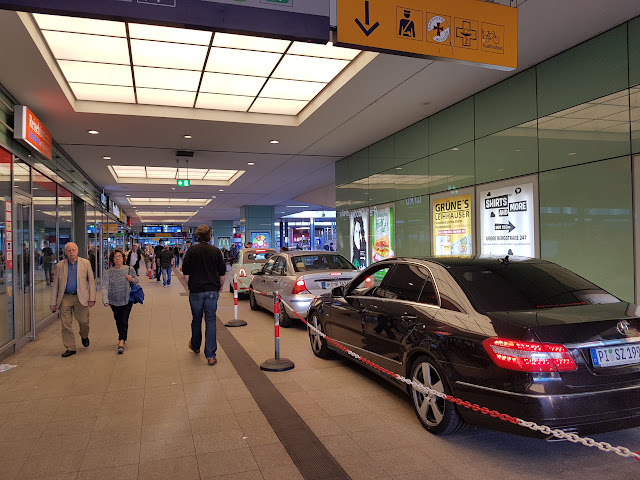 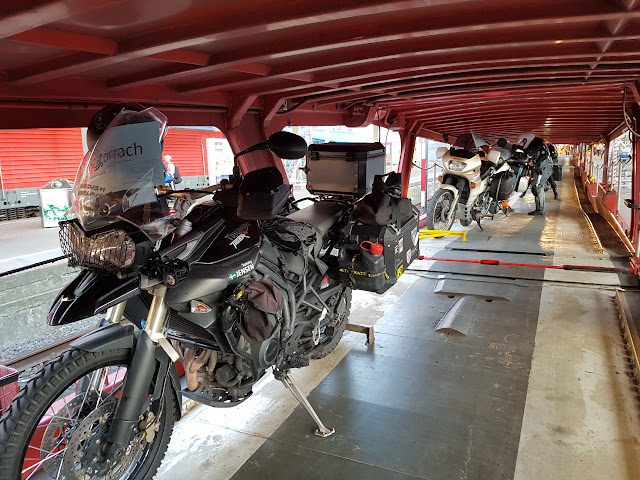 With up to five people sharing a compartment you'd better not suffer from klaustrophobia. 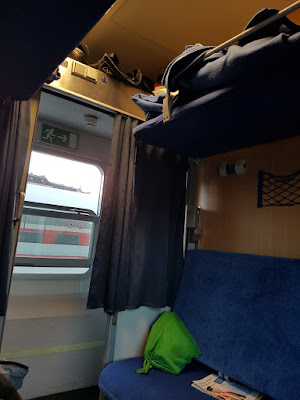 When the conductor with all the subtlety of an earthquake "knock" on the door at 6AM to deliver breakfast I haven't slept a wink.
I think the rocking motion of the train would lull me to sleep but every time I'm just about to drift of we meet another train which causes a howling werewolf sound or there's a turn in the tracks which almost jerks me out of the bunk.

Preben and Solveig delivers on the stereotype and pour themselves a couple of Gammel Dansk bitters for breakfast.
Although I'm of Danish descent I'll never be that Danish, I think I'll settle for coffee at this ungodly hour.

Debarking the train it's a cloudy morning but the temperature is alright and there's no sign of rain, pretty much optimum conditions for bike riding.
I head of to the first of today's alp passes, Susten pass.
The border passage into then non EU-member Switzerland was a breeze, they waved me through like a bad smell.

Right away it's obvious that Switzerland is a very beautiful country and even though Susten suffered from traffic it was an impressive ride.
Furka pass raised the bar yet another notch and if not the geographical high point of the day then it definitely was aesthetically.
I don't know if it's because of the never ending spruce forests of my native Värmland County but I just can not get enough of the mountains.

After a short boring haul it's time for the last pass of the day, the Forclaz which leads down to Chamonix where my next hotel is booked for the night.
What that pass lacks in scenery it more than makes up for in sheer riding pleasure, with its long sweeping curves it was a bikers nirvana and that's energy jolt was just what I needed because by now I'm so tired it's almost like every km causes me physical pain.
Even though I'm putting down all the fluids I can from both bottles and the camelbak I feel a slight dehydration headache coming and the last few km to Chamonix I'm blinking so much from tiredness I can actually feel tears trickling down my cheeks.
With all the great riding I've done today I don't know if I've ever been so glad to finally arrive at my destination as when I rode into the hotel Richemond parking lot.

I throw the gear in the room, haul my ass into the shower and hit the down to get some turbo-tourism done in the last dying daylight.
But I don't get further than the pedestrian street until I can feel my bloodsugar is down by my ancles, it's about 8PM and the last time I had anything to eat was lunchtime.
It's days like these that have made McDonalds one of the most successful businesses in the world because I felt like waiting more than five minutes to get a meal would mean certain death through starvation.

Dog tired, with a belly full of food and a head full of new impressions I actually surprise myself by walking straight past the pub next to the hotel and go straight to bed. 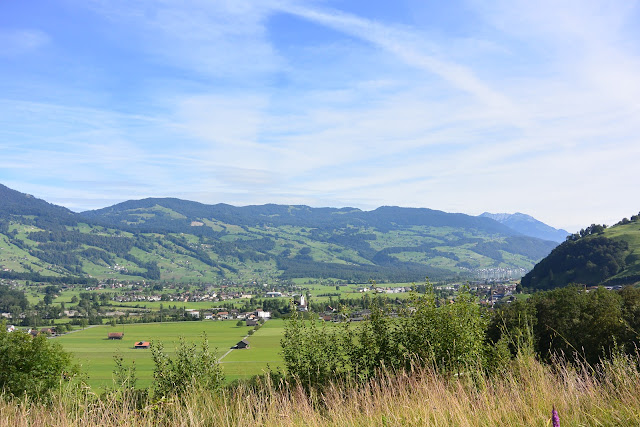 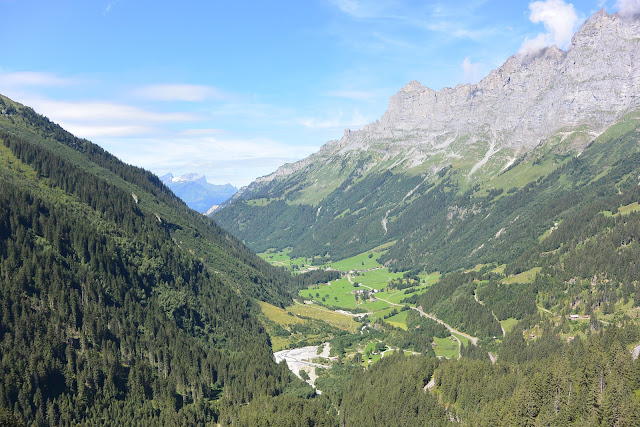 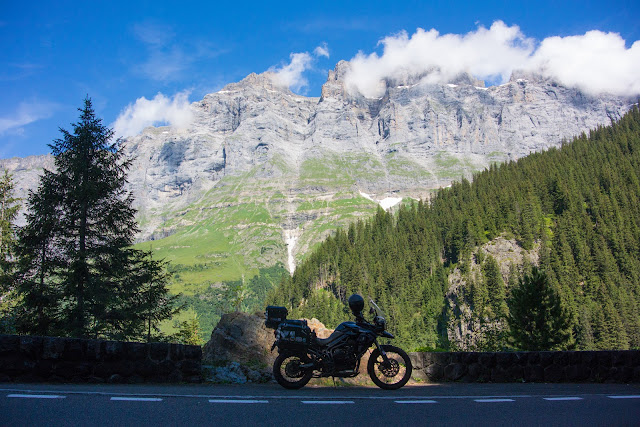 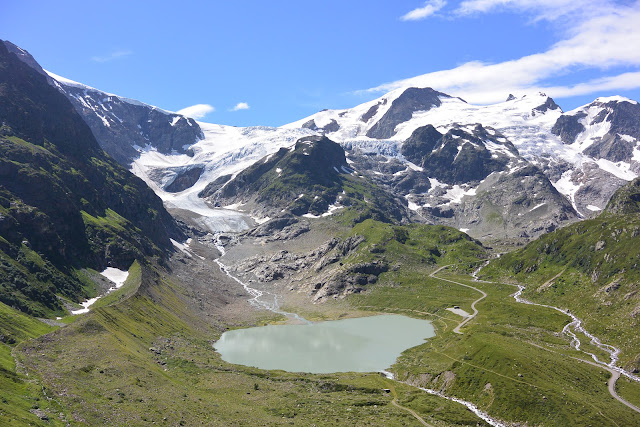 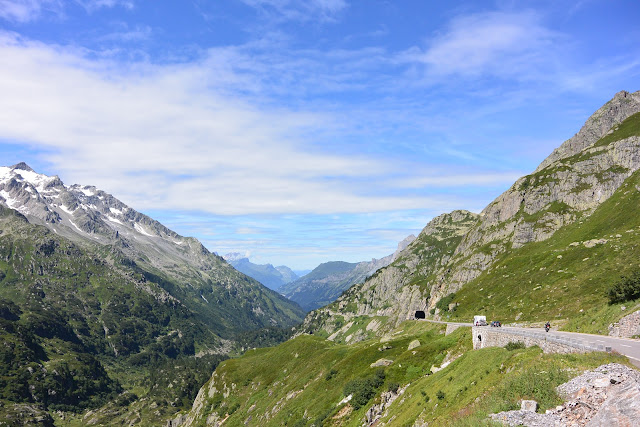 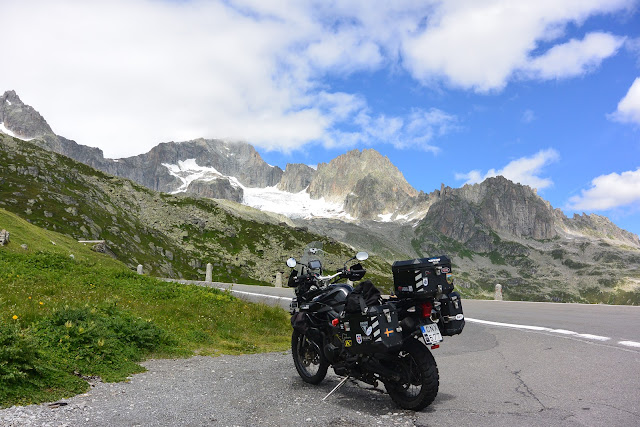 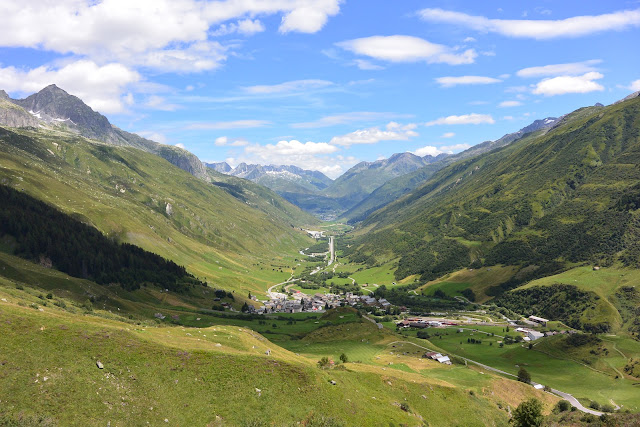 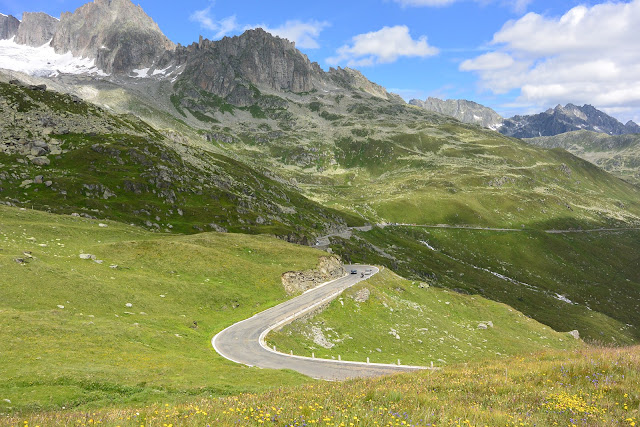 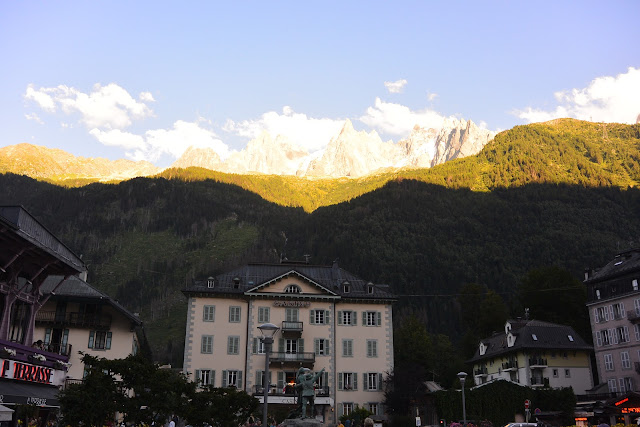 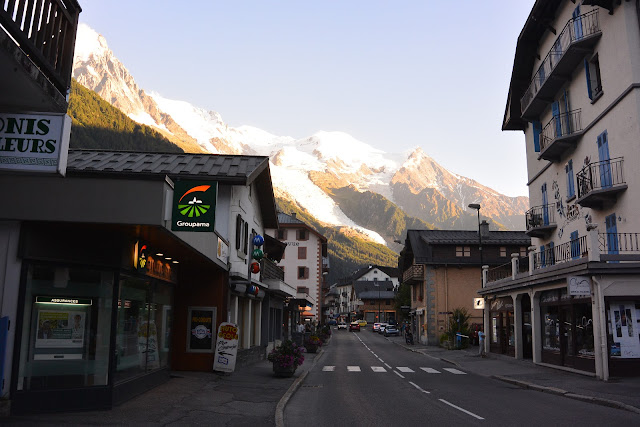 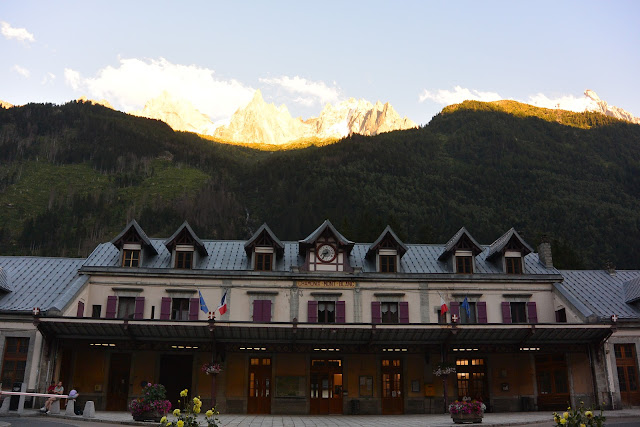 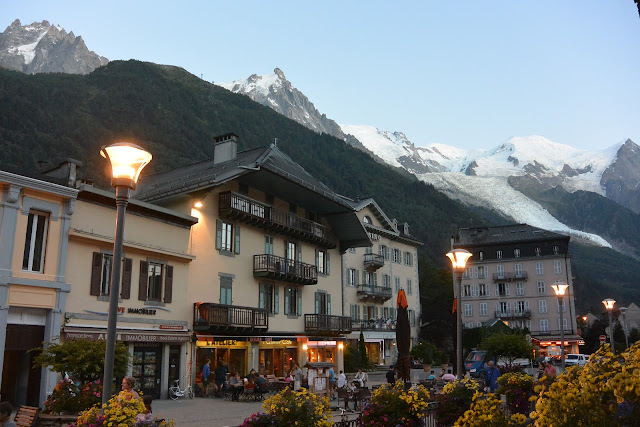