Andrew Daddo: It's all good 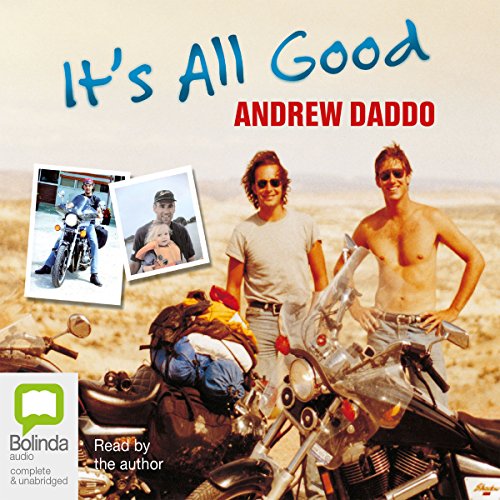 Daddo get's fired from his job as a VJ on MTV and before heading back home to Australia decides to go on a road trip across the USA.
His companion on the ride is a guy called Ray O'Neal which passed away in 2004.
Andrew then decided to write this book as sort of homage to Ray as I get it.
It is obvious that he considered Ray a very good friend as a brief passage in the book where they are separated for five days is for Daddo an ultimate test of independance.
Riding five days alone in Iowa... I mean come on?
He's actually at one point writes that he's so lonely he almost cries.
In this rather short book there are so many flashbacks to childhood and Daddos early days you sort of lose the feeling that they're actually on a trip.
After three chapters of childhood nostalgia I can't even remember where in the US they are when the story picks up again.
After the pretty much complete biography around the half way mark the story picks up around what they're actually doing in present time which saves the book from being a complete disaster in my view.
This was also one of the few times author narration was a good idea as this being read by an Australian lends some authenticity to the story, had this been read by an American or Englishman nuances would have been lost.
I can't help but note that someone at Audible production has come up with the idea to put in music at the end of each chapter.
I personally never think this is a good idea but when you end a really heart-felt letter to a dead friends daughter with a Waynes World-like guitar riff you must be completely out of your mind. It is in very poor taste to say the least.
Despite all the criticism it's not entirely without its merits. It a humorous story and a decent read taken for what it is, a biography.